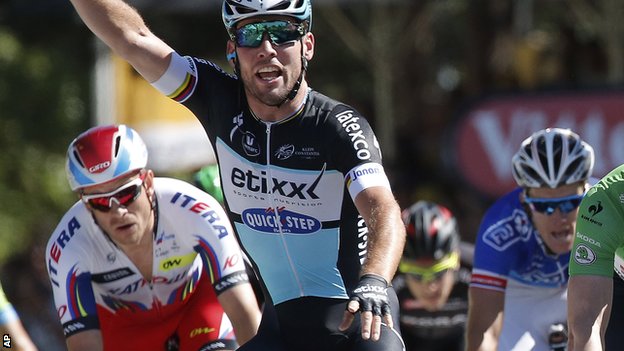 The 2011 world road champion, 30, has joined the South African team, who will be known as Team Dimension Data from next year.

"It's fair to say that most of the peloton has seen how incredible the team raced this year," said Cavendish, who added the riding for a "greater cause in the Qhubeka charity" was "one of the biggest incentives".

Team owner Douglas Ryder described signing Cavendish as a "huge step forward" for the team towards reaching the "next level in world cycling".

Talks are ongoing with EQS for sporting directors Rolf Aldag and Brian Holm, who also worked with Cavendish, Eisel and Renshaw during their successful spell at HTC to also make the move.

A secondary sponsorship deal with Deloitte has been confirmed and will help cover Cavendish's wages.

The Manxman has had a successful season, with a stage win in this year's Tour de France and the Belgian one-dayer Kuurne-Brussels- Kuurne among 13 victories.

He had shoulder surgery after being injured during the Tour of Britain earlier this month.

In 2016, he is aiming to compete for Great Britain on the track at the Rio Olympics. It will be his third Games but he has never won a medal.